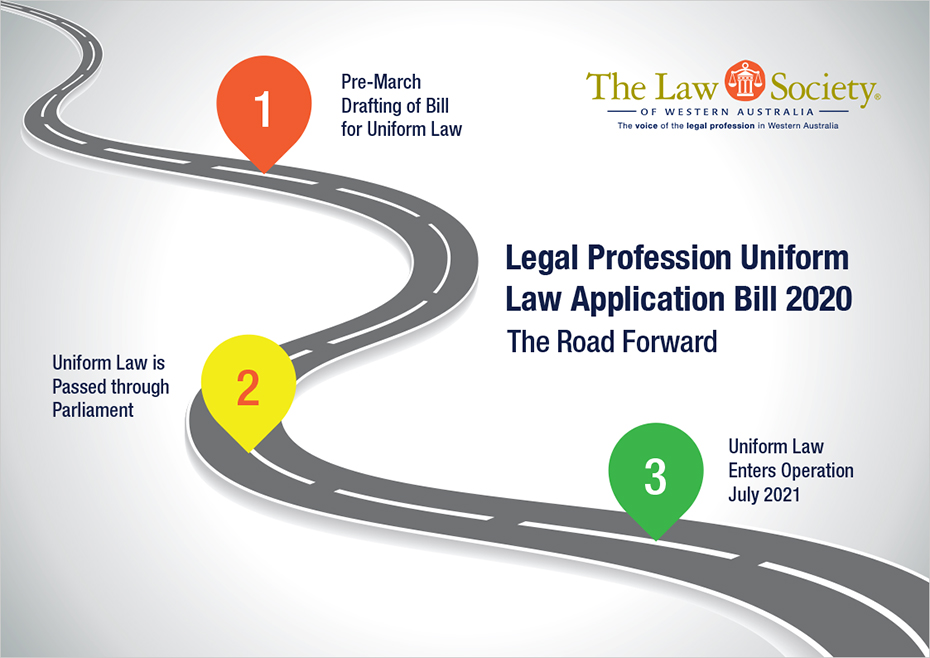 The Solicitor-General of Western Australia, Joshua Thomson SC provided an update to the Law Society at the end of June 2020 and advised that the Legal Profession Uniform Law Application Bill 2020 and the Legal Profession Uniform Law (Levy) Bill 2020 (“the Bills”) were debated cognately and third read in the Legislative Assembly on 16 June 2020 without going to consideration in detail. There were expressions of support from all those who spoke on the Bills during the second reading stage.

The Attorney General anticipates that, if the Bills are passed this year, then the Legal Profession Uniform Law scheme will come into operation in Western Australia on 1 July 2021. This will give sufficient time for local regulations and appointments to be made, and for stakeholders to finalise their preparations for the introduction of the new scheme.

This governs matters such as:

The Legal Profession Uniform Law was introduced to create a simpler and more efficient system for both law firms and their clients by cutting red tape, better protecting consumers and ensuring consistency across our borders.

The Law Society of Western Australia fully endorses the adoption of the Legal Profession Uniform Law and has campaigned for it since 2014. Find out more about the historical background by clicking on the link below.

On 5 February 2009, the Council of Australian Governments agreed that further work needed to be done to nationalise regulation of the legal profession in Australia and the National Legal Profession Reform Project was established. Background papers of the project are available at ag.gov.au.

The introduction of a uniform system of legal profession regulation has been a goal of the Law Council of Australia. This is considered to be a significant milestone towards a truly national profession, and a positive example of the profession taking a leadership role in setting its own standards.

The Law Council has produced a fact sheet which provides an overview of the arrangements that applies to interstate practitioners when practising in New South Wales and Victoria from 1 July 2015.

The Law Society of Western Australia fully endorses the adoption of the Legal Profession Uniform Law and has campaigned for it since 2014. See Briefing Paper here for more details.

Below are joint submissions by the various state and territory law societies and bar associations that have been submitted in response to the National Legal Profession Reform project taskforce’s discussion papers released in late 2009 and the Federal Government’s draft Bill consultation period in mid-2010: